skip to main | skip to sidebar

Which has a better climate - Vancouver or Victoria?

I thought I'd start a series of posts that compare Victoria's climate with the climate in other cities - call it a climate smackdown.

First up, is Vancouver.  I think most people in Victoria are aware that our climate is a lot drier and sunnier than Vancouver's thanks to the rain shadow, but I want to take a look in a bit more detail.

Let's start with precipitation.  As the chart below shows, Vancouver does get a lot  more precipitation than Victoria - an average of 1,560 mm annually vs 641 mm for Victoria.  That's almost two and a half times as much rain!  Vancouver gets more precipitation than Victoria throughout the year, but there are important variations.  During the late fall and winter rainy season from October to February, Victoria gets a little under half as much precipitation.  However, during the drier months, the difference is even greater, with Victoria getting less than one third as much rain as Vancouver between March and September. 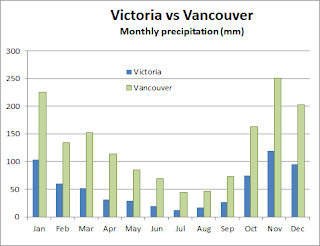 The difference between Victoria and Vancouver is very distinct.  In both cities, precipitation has been recorded for almost 120 years.  During that time, the wettest year in Victoria was 1933, when 945 mm of precipitation was recorded.  Not only is Victoria's wettest year on record still drier than an average year in Vancouver (1,560 mm), but it is drier even than the driest year every recorded in Vancouver (962 mm in 1929). 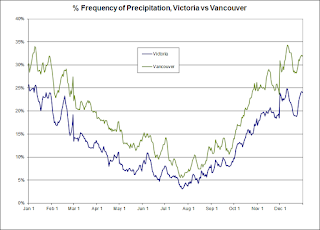 Vancouver gets nearly twice as much snow as Victoria, with an average 37 cm annually in Vancouver versus 20 cm in Victoria.  Victoria is more than twice as likely than Vancouver to experience a winter with little or no snow.  Over the past 30 years, Victoria has experienced 14 winters with less than 5 cm of snow for  the entire winter, compared with just 6 such winters for Vancouver.  Snow is also more likely to stay on the ground longer in Vancouver, with an average of 8 days each winter with at least 1 cm of snow on the ground compared with 5 days for Victoria.

Victoria is also sunnier than Vancouver, with an average 2,203 hours of sunshine annually versus 1,825 hours for Vancouver.  Victoria averages 315 days per year with at least some measurable sunshine, leaving an average 50 days per year with no sun.  Vancouver averages 76 days annually with no measurable sunshine - about 50% more than Victoria.  As with precipitation, the difference in annual sunshine between Victoria and Vancouver is quite distinct.  The cloudiest year on record in Victoria - with just 1,948 hours of sunshine recorded way back in 1914 - was still much sunnier than the average for Vancouver.  Conversely, the sunniest year on record in Vancouver - 2,109 hours recorded in 1987 - was still much cloudier than the average for Victoria.

Up to now, I think you can safely say that Victoria is clearly winning this climate smackdown.  But now we take a look temperature, and things become more complicated.  The chart below shows the average daily maximum temperature in Victoria versus Vancouver.  The average high temperature in Victoria is almost a degree warmer than Vancouver during the winter months, and it's about the same during the fall and early spring, but it is significantly cooler during the late spring and summer.  It's about 2 degrees cooler in July and August - averaging 20.5 degrees in Victoria versus 22.4 degrees in Vancouver.  The numbers in the chart are based on Victoria Gonzales, located right on the Strait of Juan de Fuca.  Away from the Strait, at the University of Victoria, the average high temperature in July and August is 23.7 degrees - more than 3 degrees warmer than Gonzales.  Nonetheless, Victoria is known for its relatively cool summers - particularly in the southern part of the region near the Strait of Juan de Fuca.  The Vancouver numbers are for Vancouver Harbour.  While this is also near the water, the Strait of Georgia is not nearly as cool as the Strait of Juan de Fuca during summer, so the cooling effect is less.  However, inland locations in the Vancouver region do have summer daytime highs that are 1-2 degrees warmer than the Vancouver Harbour numbers shown. 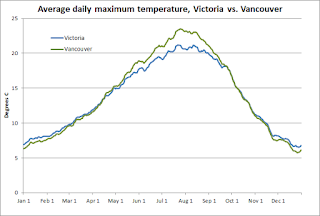 The next chart shows the average daily overnight lows in Victoria versus Vancouver.  Again, Victoria is nearly a degree warmer than Vancouver during the winter months.  Another way to look at this is to compare the average numbers of days each winter when the overnight low drops below freezing.  Vancouver averages almost twice as many "frost" days: 18.0 versus 9.5 for Victoria.  Victoria has experienced 7 winters in the past 118 years when the temperature did not drop below freezing for the entire winter.  Vancouver has never recorded a frost-free winter.  But while Victoria has warmer overnight lows in the winter, Vancouver has much warmer overnight lows during the summer.  During July and August, Victoria has an average overnight low of 11.8 degrees versus 14.4 degrees in Vancouver.  Victoria is definitely not known for its sultry summer nights!  Of course that could be a good thing if you don't have air conditioning! 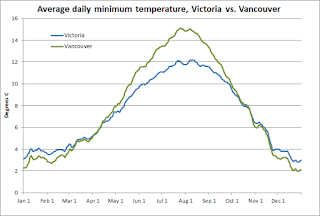 What makes a good climate is quite subjective, but I think that overall Victoria beats Vancouver.  The drier, sunnier weather, with less snow and frost more than offsets the sometimes cool summer days and chilly summer nights.
Posted by StevenM at 8:17 AM